Meet our Board of Directors

The Cultural Council Board is made up of a diverse group of community leaders   who understand and champion the value and importance of
​MORE ART and MORE CULTURE throughout our Greater Jacksonville area. 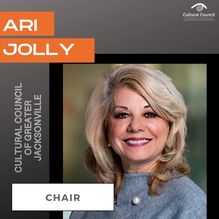 ​ Ari Jolly  Chair
Assistant General Counsel for GuideWell Mutual Holding Corp.​
Ari Jolly is a Senior Assistant General Counsel at Florida Blue and provides corporate development as well as board governance support related to the various Florida Blue subsidiary and joint venture companies. Prior to joining Blue Cross and Blue Shield of Florida in 1993, Jolly was an officer in the United States Navy from 1983 - 1990 and the recipient of a Navy Achievement Medal (1987).
Jolly is a member of the Florida Bar and the Jacksonville Bar Association, served as the Chairman of the Board of the Greater Jacksonville Area USO, serves on the Fleet Landing Board and previously served as the Chairman of the Veterans Network at Florida Blue, where she spoke on the topics of women veterans and the multicultural US Armed Forces. In addition, Jolly is the corporate secretary to the Boards of Florida Health Care Plan, Inc., Navigy Holdings, Inc., GuideWell-Sanitas, LLC, Florida Blue Medicine, Inc., GuideWell Core Solutions, Inc., and GuideWell, Inc. and has supported several Florida Blue conferences on the topic of board governance best practices.
Jolly graduated from Jacksonville University and the Florida State University College of Law. She is also an honors graduate from the Naval Legal Justice School, Newport, Rhode Island.
In addition to serving on the board of the Cultural Council, Ari was also appointed by the governor to serve as the Chair of the Board at JTA. 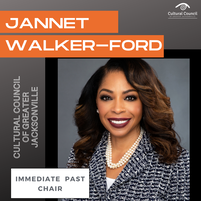 ​  Jannet Walker-Ford  Immediate Past Chair
​ Senior Vice President & National Transit & Rail Leader for WSP USA
Walker Ford is a graduate of the University of Memphis with a bachelor’s degree in management information systems, Central Michigan University with a master’s degree in business administration. She has completed significant coursework towards her doctorate in information systems from Nova Southeastern University.
She serves on numerous diverse boards including as board chair of the American Public Transportation Foundation, is a board member of the American Public Transportation Association, chair of the WTS International Foundation Board and vice chair of the WTS International Board, ENO Transportation Advisory Board, a member of the Jacksonville University Board of Trustees, and is chair of the Greater Jacksonville Cultural Council Board.  Learn more about Jannet Walker-Ford. 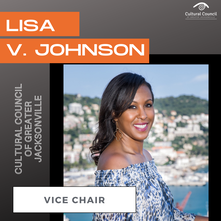 
​ Lisa V. Johnson  Vice Chair
Chief Technology Officer with IBM
Lisa Johnson is a seasoned Chief Technology Officer for one of the world’s premier technology services company, IBM. Currently, she manages a global client, the largest independent systems integrator in the world, and operates across 6 continents.  During her 25+-year tenure at IBM, Lisa has been recognized with many corporate awards for outstanding sales leadership, and has been recognized in the industry for some of her innovative efforts with clients around transformation and modernization.
Learn more about Lisa V. Johnson. 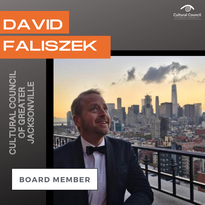 David Faliszek, Secretary
Senior vice president/national contracts and lender strategy
counsel for Fidelity National Financial
David Faliszek is in his third year on the CSGP Committee and also serves as a Board member for the
Cultural Council of Greater Jacksonville. He oversees National Contracts and Lender Strategy Counsel at Fidelity National Financial. David enjoys visiting arts organizations throughout Jacksonville and seeing the new and exciting things that artists are doing. He even took a beginner’s glassblowing class at Jacksonville University in the spring of 2020. David attended the University of Notre Dame for his undergraduate degree and the University of Southern California for his Doctor of Law. 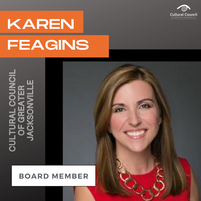 ​  Karen Feagins
Vice president, client and community relations director for PNC
​  Bank’s PortCities Market
Karen Feagins is Vice President, Client and Community Relations Director for PNC Bank’s Port Cities market of Jacksonville, Savannah and Charleston. In this role, she is responsible for overseeing PNC’s strategic brand alignment and philanthropic initiatives.
Before joining PNC in March of 2018, Karen served as the chief operating officer of WJCT Public Media. She began her career as a television news reporter and joined WJCT in 2005 as the host of 89.9 FM’s Morning Edition. Over 13 years with the company, she served in a variety of roles in radio, television and executive management.
Karen is active in the community, serving as a board member for the Early Learning Coalition of Duval, the Cultural Council of Greater Jacksonville, and WJCT Public Media. She is a 2016 alumna of Leadership Jacksonville and was named one of the 2019 “Women of Influence” by the Jacksonville Business Journal. She holds a degree in broadcast journalism from The University of Missouri and has two daughters. 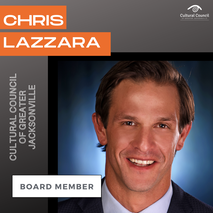 
​ Chris Lazzara
Founder of MountainStar Capital
Christopher M. Lazzara is the Co-founder and Chief Executive Officer of MountainStar Capital, headquartered in Ponte Vedra Beach, FL. Mr. Lazzara is skilled in finance, operations, and management. He leads the firm’s investment committee, directs investment strategy, and oversees all major initiatives for MountainStar Capital and its affiliated companies.  Although its holdings include diversified positions in financial markets, the firm’s focus is in active and passive direct investment, real estate, health and joint venture opportunities. The firm’s flexible decision making process, team culture and due diligence processes are the central components of its success.
Mr. Lazzara is also the Co-founder of the Georgia School of Orthodontics, the nation’s largest Orthodontic Residency Program. The Program has gained national acclaim for its advanced facilities, quality care and service to both the military and underserved communities.  He serves as the Chair of Finance on the Executive Committee of GSO’s Board of Trustees and leverages MountainStar’s Health Division to oversee administration of the Program.
Prior to founding MountainStar Capital in 2013, Mr. Lazzara served as Senior Managing Partner of Ponte Vedra Management Group (PVMG), an asset management group with diverse real estate, securities, and corporate holdings.
Mr. Lazzara is an active member of the community serving on the executive committees of several boards. He is on the Board of Trustee’s Executive Committee for the MaliVai Washington Youth Foundation as well as the University of North Florida’s Student Affairs Community Council. Mr. Lazzara also directs all operations of the Lazzara Family Foundation, which has provided grants to worthy organizations since 1997. Mr. Lazzara co-chaired the 2016 Cowford Ball benefitting the American Cancer Society, which raised more $650,000 for the fight against cancer.
In 2017, Mr. Lazzara was honored with the Cultural Council of Greater Jacksonville Robert Arleigh White Award for Art Advocacy. He currently serves as board member for the Cultural Council of Greater Jacksonville. He was recognized as one of the six individuals who demonstrated the highest dedication to arts and culture in the Jacksonville community. Mr. Lazzara is also a member of YPO Jacksonville, the premiere leadership organization of chief executives around the world. Additionally, Mr. Lazzara was named as a “40 Under 40” honoree by the Jacksonville Business Journal. The Jacksonville Business Journal ranks top young professionals in North Florida annually.
Mr. Lazzara is a graduate of the Cox School of Business at Southern Methodist University where he received the Presidential Award for Service.  He has numerous certificates from the Wharton’s School’s Center for Executive Education and is a graduate of the Political Leadership Institute of Jacksonville. 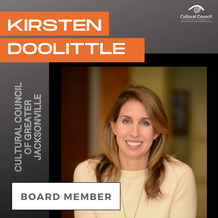 ​
Kirsten Doolittle
Founder and managing shareholder, Aequitas Counsel
Kirsten graduated cum laude from Dartmouth College in 1996 with a Bachelor of Arts in History and a Minor in Education. After graduation, she worked for the New York County District Attorney’s Office assisting trial attorneys in the Special Prosecutions Bureau. In 2000, Ms. Doolittle graduated from the University of Southern California Law School, where she served on the Law Review and worked as an extern to the Honorable George King, District Court Judge for the United States District Court for the Southern District of California.
In 2005, Kirsten began working for the Jacksonville, Florida law firm of Henrichsen Siegel, PLLC, where she continued her employment practice. At Henrichsen Siegel, she represented both employers and individual employees. In her representation of individuals, she litigated several cases in the federal courts involving wrongful termination, race, gender, and disability discrimination, and retaliation, and negotiated severance agreements and employment contracts on behalf of executives.
Among her many career accomplishments, Kristen has represented labor unions in proceedings before the National Labor Relations Board, in the federal courts, and before various Senate and House Committees. In the Spring of 2007, she started The Law Office of Kirsten Doolittle, P.A.
Kirsten list of  honors and awards includes: 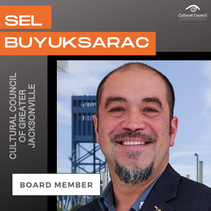 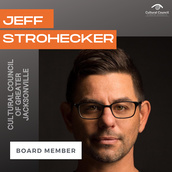 
​ Jeff Strohecker
Owner : Jeff Strohecker Photography
Jeff Strohecker is an artist and photographer with over twenty years experience creating imagery seen in advertising and magazines nationwide.
A Jacksonville native Jeff received his BA in Photography from UNF in 1999. His early career focused on exhibiting while training under several top photographers.
Jeff is known for his work as a fashion, beauty and celebrity photographer as well as his more recent studio work creating commercial product imagery.
Since returning to Jacksonville in 2014 Jeff has been a regular image contributor to our regional health industry.  Proudly producing images for several pediatric cancer relief efforts including The Tom Coughlin Jay Fund.
Outside of his commercial work Jeff enjoys creating a variety of Fine Art imagery including surreal landscapes, musicians and anything with a motor. 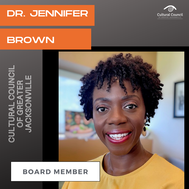 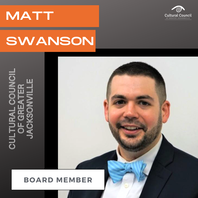 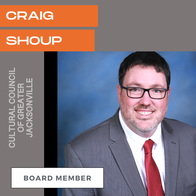 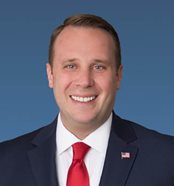 Kevin Carrico
Jacksonville Councilman for District 4
Kevin Carrico, born the son of a U.S. Army officer, grew up living all over the country and all over the world. Ultimately, his family settled in Jacksonville and he graduated as a Mandarin Mustang in 200I, where he played for the school football team and sang for the choir.
In his adult life he continued to move a lot. He graduated from Florida State University (Go 'Noles!) in 2005 with a BS in sociology. From there he had a successful career in private country club management, working in many places throughout the South. After a tug on his heartstrings to do more meaningful work, Kevin answered the call and returned to Jacksonville to work at the Jacksonville Youth Sanctuary, where he eventually became the President of the Board.
On his journey in public service, Kevin went on to work as the Vice President of Operations for the Clara White Mission from 2012-2016, where his organization helped Jacksonville's homeless population, giving them a chance to work their way into better circumstances. In 2016 he became the Vice President of Operations for the Boys and Girls Club of Northeast Florida. Kevin is passionate about keeping kids safe through prevention and intervention, and reaching kids at an early age to make a difference in their lives. The organization serves 8,000 kids in northeast Florida and has grown from 12 to 38 clubs since 2016.
Kevin earned his Master's Degree in Public Administration with a concentration in nonprofit management from the University of North Florida in 2016. He also graduated from Lifework Leadership in 2016 and Leadership Jacksonville in 2019. He has served as a member of Stakeholder Relations Committee for the MPA Program at UNF since 2013, and was a mayoral appointee to the Citizens Planning and Advisory Committee, Zone 4 from 2014-2016.
Kevin and his wife Shawnelle have a baby girl named Monroe. The family has attended Impact Church since 2016, where Kevin sings in the church choir.
Kevin ran for City Council in 2020 out of a genuine love for people and service. He loves all people, no matter who they are or where they're from. Though he has lived and traveled all over the country, Jacksonville holds a special place in his heart, and he is devoted to serving the people in his community.
*Written by Kevin Kraft
Student of Douglas Anderson School of the Arts